A Bit of OVSPS History 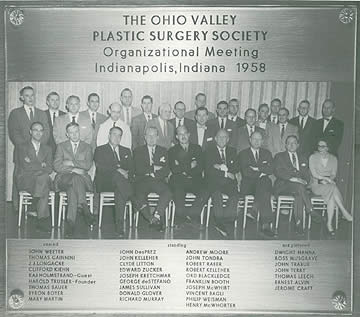 The Ohio Valley Society of Plastic Surgeons was established in Indianapolis in 1958. The original name of the organization, the Ohio Valley Plastic Surgery Society, was chosen at an organizational meeting on January 20, 1958, by 34 plastic surgeons congregating at the Indiana University Medical Center under the leadership of Thomas B. Bauer, M.D., president pro tem of the fledgling group. The host of that meeting, Harold M. Trusler, M.D., then Chairman of the Department of Plastic Surgery, had for several years held clinical meetings which were attended by University of Indiana plastic surgery alumni and surgeons from other areas in the midwest. At a particularly well attended clinical meeting in 1954, Dr. Trusler and colleagues decided that an annual meeting would be of benefit to all. In 1958 there was enough interest in a professional association on a multistate level, so the Ohio Valley Society was created. The original geographic delineation for the group included Ohio, Indiana, Kentucky and West Virginia, all states bordering on the Ohio River.

In March 1958 S. Milton Dupertuis, M.D., head of the Plastic Surgery Department at the University of Pittsburgh, expressed interest in joining this new regional society along with his colleagues from Pittsburgh and surrounding cities in western Pennsylvania, another state with part of its border along the Ohio River. This action was taken at the first regular meeting of the society in Cleveland, Ohio in February 1959 with Clifford L.Kiehn, D.D.S., M.D., President (Cleveland), J.J. Longacre, M.D., Vice-President (Cincinnati) and John M. Tondra, M.D., Secretary-Treasurer (Indianapolis). Thus the Ohio Valley Plastic Surgery Society became a regional organization comprised of plastic surgeons from five states, Ohio, Indiana, Kentucky, West Virginia and western Pennsylvania and remains the fourth largest regional society in the U.S. It should be noted that Dr. John Tondra became the "unofficial" historian at the inception of the Society and largely through his dedicated efforts the archives of this organization were preserved and maintained throughout the first 25 years of its existence.

NOTE: The Annual Meetings were usually, but not always, held in the Presidents' hometowns. Those who chose other locations for these meetings include: 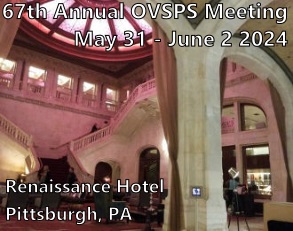 become a member >>
complete an application and join us today!

conference exhibitor >>
register for the conference.

conference papers >>
submit an abstract for the conference.